Do you remember when you un-learned to play? And now, as a parent with children, what to do? This post is about that.

I can consider myself a lucky person because I played a lot. Not only with typical “girl things”, like dolls, role-playing house or school, but also riding a bike, playing soccer, marbles and all kind of games: hide-and-seek, tag, cops and robbers, capture-the-flag, dodgeball and so on.

When I was home, I would create “movies” with dolls. My brothers would start playing and suddenly there they were, hypnotized, watching me playing. Sometimes, the stories took days, with many “chapters”, in enchanted kingdoms, lost forests, parallel worlds or the Mushroom Family’s quotidian.

When I was 15, I already had a boyfriend. Although I still kept playing with dolls. I would promote Suzi (the Brazilian version of Barbie) fashion contests, those were very competitive among brothers and neighbors. Hilarious recordings with special sound effects (sea waves using the out of air TV; horse trotting on shoe boxes). Or theater plays with cousins. I meant rest for the mothers, mesmerizing all kids, for hours. People used to say: “how good she is with children!”

When I would go to my cousin’s home, who was 1 year older than me, I’d notice she would tidy up the doll house with all furniture, but after that she wouldn’t be in the mood for playing. Later, it happened to me: I loved to organize the scenarios, the characters, but the “movies” didn’t flow anymore.

Time went by. My children were born. I have even been trying to recreate the old plays, but it was in vain. I struggled to find where and when I lost my original spontaneity and enthusiasm. Perhaps it’s because now the stories have been happening in reality: my real home, my profession, my family. I wasn’t “good with children”. Actually, I WAS a child. Now, I’ve been playing being a grown-up, and the act of fantasizing lost its fun a little.

I found out other things. If I want to play with my kids, I choose toy blocks, Lego or wood building bricks, because of my sense of organization. Or table games like domino or memory, to enjoy together and not to only guide the play.

There’s a play, however, which is invincible in my preference: hair-dresser. I divide hair locks equally among the interested kids, spread dozens of hair elastic bands, clips and ribbons, combs and hair brushes and let them invent the coiffure they want. Justice be made, this idea wasn’t mine. They love it. Me too. I deal with a pull here, a stuck ribbon there, but I keep quiet, just enjoying the pampering, sometimes I even have a nap.

It’s also useful during boring-waiting-situations, like at the airport or the doctor’s office. I become a big toy and, even without the ribbons, they spend hours combing, curling, braiding and separating the locks, entertained. I even saw children from other families wanting to play, too.

You can call me a non-imaginative, lazy person, who is misleading my innocent children. I propose a challenge, though. Just try it. Afterwards, those who don’t like those rapid little fingers massaging your head and combing your hair, cast the first hair brush! hahaha 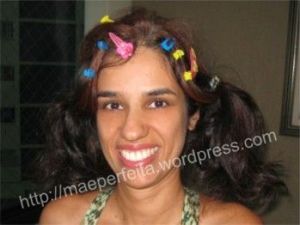 Creation by my little hair-stylists!

You can also see:

Only mothers are happy – Marusia speaks

This post in Portuguese: A brincadeira mais gostosa do mundo

4 thoughts on “The World’s best play”

If you, sometime, have already tried to fit (without success) in the perfect mother examples of the media (as I have), you’re welcome to our blog! “The perfect mother” is a non-pretentious version in English from the “Mãe perfeita” blog, originally in Portuguese, written by a Brazilian non-perfect, still learning mother and a non-perfect, still learning student of English.

It’s an open space to share our experiences (it includes the suggestions to improve my text and language), have fun, “unstress” and find that the only recipe to be a mom is: there are no recipes (all statements to the contrary are immediately revoked).